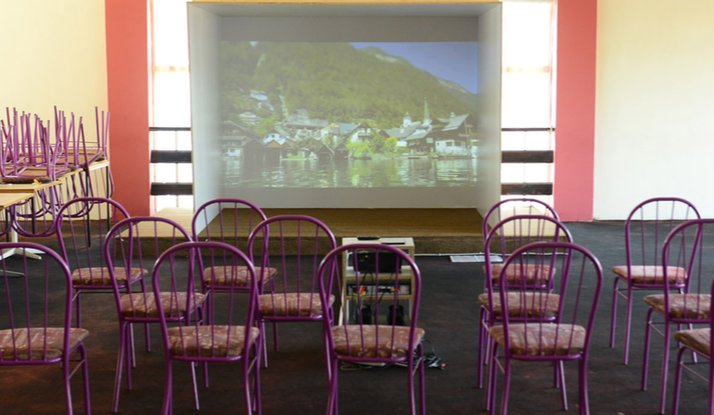 Telling the story of the Austrian village Hallstatt which has been being copied in Boluo, China, as a high-end real estate project, Double Happiness (2014,75 Min.) has blurred the boundaries between truth, fiction, performance and interviews with experts, to reveal the workings of image-making in the global world.

Shot in the fashion of a (docu-) musical where singing and dancing become the predominant narration, the film references The Sound of Music (1965), the Hollywood production of a fantasized Austrian culture. The musical performances in an idyllic landscape remind us of the politics of cultural identity in the global system and how fantasy traverses the ideal living in encountering cultures through media society. China’s Hallstatt in Boluo was planned as a residential area and turned into a contemporary theme park within only one year.

The protagonists, whether in the wedding pictures or in culture tourism, turn themselves into actors and actresses, playing the roles given by the pre-written cultural script. The tourist, dressed up in local dresses, posing for photos, resembles the performer singing the songs in the film.

The film scenes, woven by the urbanist and architect, TV talk shows and real estate advertisements, karaoke singing and wedding picture posing, are intertextually presented to a visioning apparatus of the film. Altogether, these performative aspects of the film are supposed to witness the contemporary cultural situation that we all live in, where media itself diffuses the economy of collective desires.

This meta-aesthetic dimension can only be disclosed in a reflexive mode that synchronizes the genre of documentary and fiction. The Hallstatt in China is as illusory as, or as real as the original one, which is full of touristy consumerism and cultural fantasy from Asia, and the mating of both in ‘the double happiness’ is an epitomic moment of our cultures in a globalized world.

The War That Never Was