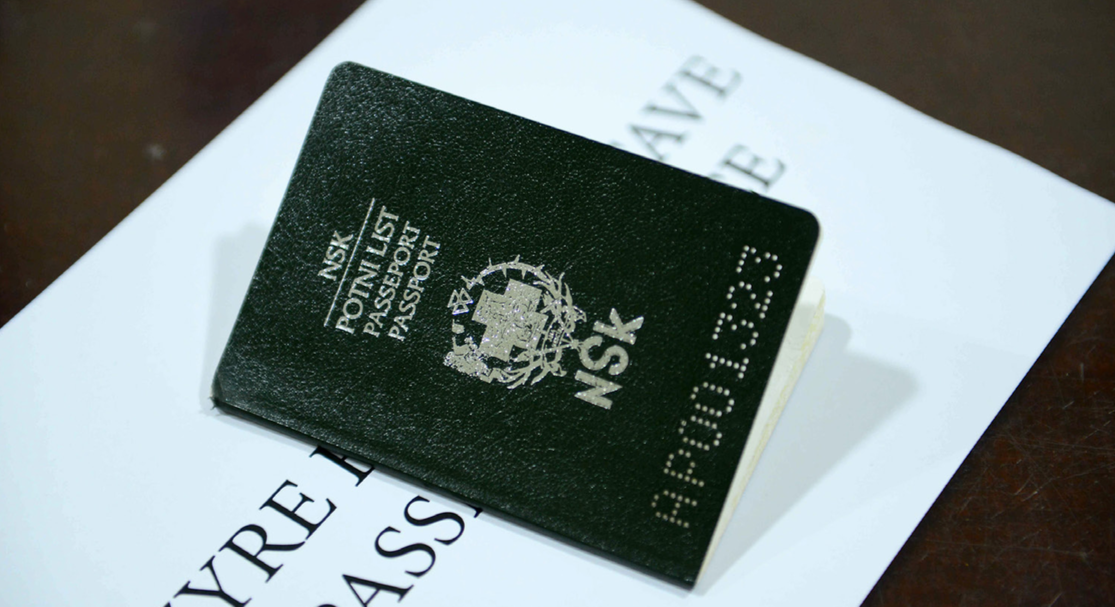 The NSK State in Time was founded in the early 1990s. We started issuing passports straight away; their manufacture and quality meet the required standards for this type of product. To date, a great number of people have applied for and received our passports, becoming citizens of the NSK State in Time. Needless to say, they have kept their principal citizenship as well.

Most applicants are people from the art scene, that is, either artists or people who regularly follow art events. This group of NSK passport holders come for the most part from the developed countries of Western Europe and North America, and are members of a relatively prosperous strata of society. Thus, we can say that a majority of the citizens of the NSK State in Time come from the so-called First World. Their reasons for taking NSK citizenship are mainly to do with their understanding of and involvement in contemporary art.

Although numerous, these NSK passport holders are not the only big social group among the citizens of the NSK State in Time. At the time we first started issuing NSK passports, new countries were being formed in our part of Europe, and the territory of the former Yugoslavia was still being ravaged by war. There was a great deal of interest in our passports in this area, particularly in Sarajevo.

There, most of the passports were also issued to people closely associated with the art world; their interest, however, was more than merely artistic. The citizens of Bosnia-Herzegovina often faced difficulties when traveling abroad at that time. There are a number of stories about cases in which an NSK passport was used to cross a border after a passport of Bosnia-Herzegovina had failed.

More frequently, NSK passports were used as supplementary documents. During that period of time, the interpretation and use of an NSK passport differed radically for people from the so-called Second World from the usual understanding of it as an artifact. Despite the awareness that an NSK passport is not a replacement for a bona fide document to be used when crossing a state border, a number of people took a risk and used it as a functional surrogate for the passport of their country.

The two groups of NSK passport holders presented above have close links with the sphere of art. Although the individual holders’ reasons for having an NSK passport vary with their position and status, they can nonetheless all be said to understand the NSK passport as an artifact (which in a pinch can perform other functions as well).

But in recent years, applications have begun to arrive from Africa, more specifically, from Nigeria. Just a handful at first, then their number began to grow. Since all the applicants are from the same town, we presume the information is passed on from person to person. The sum the applicants are required to pay is small, but probably not negligible for the inhabitants of the so-called Third World. I do not think we are mistaken in our deduction that the Nigerian applicants’ interest is unrelated to art. It seems more likely that in the Third World, the NSK State in Time passport has ceased to be merely an artifact and become a viable document.

How can light be thrown on such a close encounter between two mutually exclusive worlds: the complex, highly sophisticated, and abstract sphere of contemporary art, and the politically, culturally, and economically profoundly destabilized Third World, where bare survival is frequently an issue and whence people decide to emigrate en masse to find a better life? (With Europe the coveted destination, the media report on worse shipwreck disasters every year, and the growing numbers of casualties as people set off on expensive and dangerous illegal crossings.) Two worlds so far apart that their meeting can only be understood as a consequence of modern-day technologies, specifically the Internet enabling the propagation of information where it was not possible before.

Four documentary videos made in the last two years were shown at the exhibition, as well as a coded archive of the numerous letters of application for the NSK passport:

“Words from Africa,” IRWIN in association with NSK citizens (NSKSTATE.COM), 2007

You will see and hear how views on the NSK passport have changed in Sarajevo since the time the city was under siege; what Taiwan and the NSK State in Time have in common and how the Taiwanese understand the NSK passport; and how a symbolic object, after having been on sale for fifteen years in the First World market, where it was predominantly recognized – despite or perhaps due to its ambivalence – as an art object, became a functional document in the Third World. In short, how the word turned to flesh.