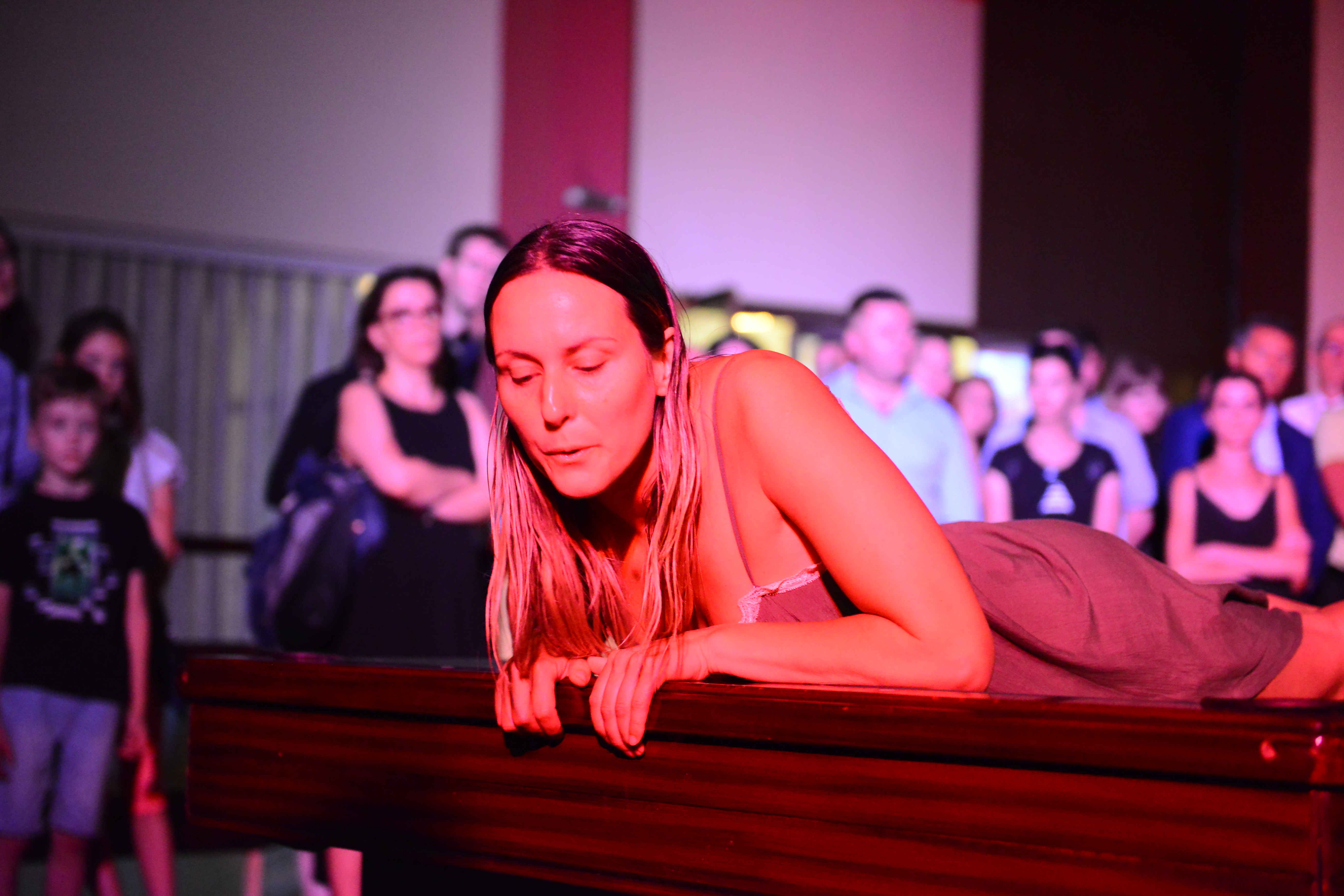 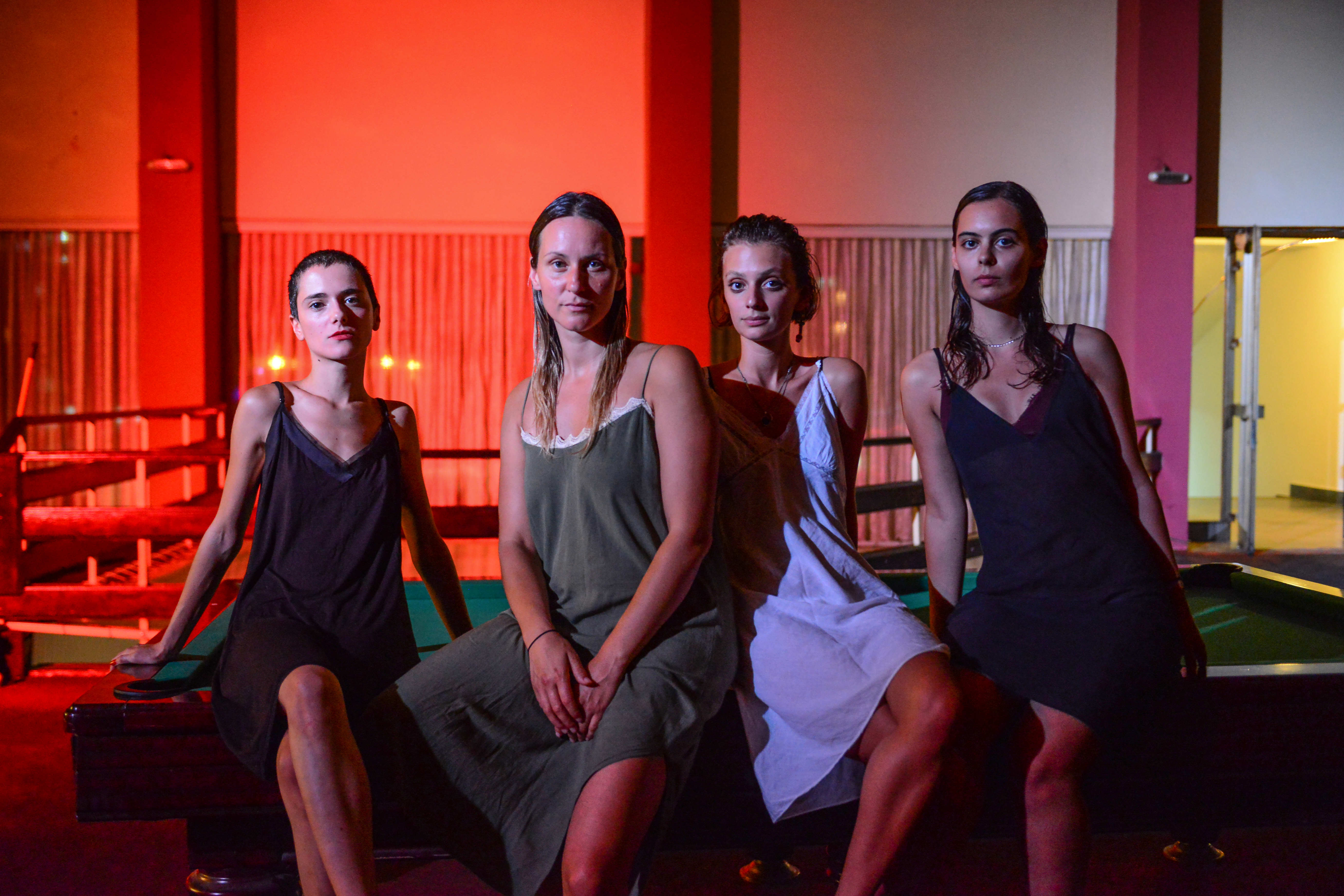 In her performance Waterfalls, created and presented for Autostrada Biennale, London-based artist Alketa Xhafa-Mripa contextualizes the past, present and future of borders.

At the centre of an enclosed room inside the Prizren bus station, there is a pool table, surrounded by people. One by one, the artist and four other women slowly emerge from the crowd and lay down their bodies over the table and spit many times in different directions.

They spit violently, as if to say: “Be damned with your borders and the rules you created for us.”

Women with various societal roles climb over the table. The first woman, Alketa Xhafa-Mripa, represents female creatives. The next wears a transparent dress, alluring and sexual. The third is pregnant, representing mothers. The fourth represents the female members of the LGBT community. The last one that appears, the youngest, represents the woman of the future; she is still naive, but aware of her fate. She loves life but is painfully aware of the limitations she faces. This last woman spits more softly, creating the allusion that she has not been confronted with these themes for long.

The pool table as a symbol for entertainment is now converted into a platform from which the women protest. Instead of entertaining, these women are discontented by contemporary life and they spit over the borders and rules created through the centuries and that are being created still. The establishment of such physical and psychological borders is supported through the politics and society in which they exist. Instead of hoping to live in a world where arcane borders and rules increasingly disappear, they are confronted with more and more each day.

Pool is a male-dominated game where they have the cues in hand to control and shoot the balls in the ‘right direction,’ an allusion to the fact that men take decisions in contemporary society. They shoot the balls into the pockets, score points against each other – they take into their hands decisions for the future of men, women, and the whole society. The work of Alketa Xhafa-Mripa is also a protest against the male decision-makers, who ‘play games’ with human lives.

The women represented within this installation have had enough of such decisions. They protest by spitting against these borders, created for the different communities within a society, or to stop immigration. They protest the limitations and controls for foreigners, the LGBT community, mothers, women, young girls with their life ahead of them, for the rules and orders that are created against their will all over the world, but which they must abide by. They protest against the borders and rules created by society for female artists.

Alketa Xhafa-Mripa globalises the issues that tether all women around the world by demonstrating points of views based on fact. The shape of the pool table echoes the symbolism that these women are demonstrating in all four corners of the world. The five women in sequence climb and spit repetitively. The audience gets the message that despite the protest, the same act is never ending.

Waterfalls are being created by their spit. The audience becomes restless. In the pause between the women’s actions, the visitor wonders whether the performance is over. This is what the artist provokes, and makes us aware that this is still happening. Although women all over the world were confronted many times with such limitations and discriminations, and they have protested many times, it happens again. And again. They must continue protesting if they want change. A kind of meditation occurs through the darkened light, the silence (except for the noise of spitting), and the repeatedness of the actions… Is this a never-ending story? How will it end? How could it end? Additional questions the artist provokes with this performance. © Dr. Penesta Dika, Art historian / Founder of SciTechArt in Vienna.